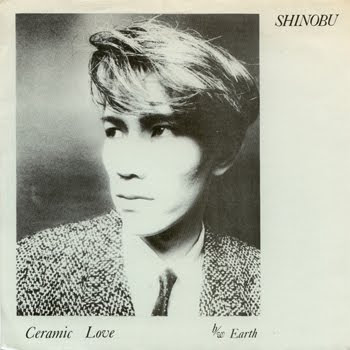 Side A
Ceramic Love

Lenght: 06:33
Bitrate: 320 kbps
As I know first impressions can be deceiving, the stuff I've been posting thus far is records that I've had in my possesion for a while, listened to quite a bit and formed some kind of an opinion of. However, I will be making an exception for this charming piece of flimsy plastic that just recently popped through my mailbox.

A truly delicious piece of synth-pop goodness; the "Ceramic Love" 8" flexi was most probably the only ever release by SHINOBU, a duo consisting of Shinobu Narita and Ken Asama. The former went on to form techno-pop unit Urban Dance and was also a member of 4-D (which also consisted of members from Dada - the legendary ambient band whose debut LP on Vanity Records is one of the most sought-after Japanese records) whereas the later faded into obscurity.

This was put out sometime during the 80s (no information regarding a more precise release date is to be found either on the flexi or on the internet) on Kang-Gung Records - a somewhat obscure synth-label that also put out records with Glass Tube and P-Model related band Shun.

Casting a glance at the music, the title track is an utterly charming piece of minimal techno-pop. The labyrinthine construction of "Ceramic Love" with it's many different and differing sections may appear perplexing at first, but let me assure you - once you get it under your skin it stays firmly in there!

Despite the track being quite polished (all aflutter with glistering synthesizer pulsations and melodies), the quirky and minimalistic songstructure gives off an irresistibly endearing atmosphere of DIY - one can just imagine messrs Narita and Asama twiddling away on their knobs (of their synthesizers, you dirty freaks!) for hours on end in a small basement studio.

Some highlights include the sublimely spartan verses (consisting of naught but drums, vocals and occasional twinkles of crystalline synth - less is so much more) and the fabulous bridge/refrain part - the sudden introduction of the impossibly fat and warm "synthe-bass" and backward bloops are to these ears pure, orgasmic aural bliss. The futu-surrealistic lyrics about fumbling around with red switches and unexpectedly finding love in laboratory environments seals the deal. A scan of the lyric sheet is of course included here for your sing-along pleasure.

The B-side, "Earth", is a mainly instrumental solo-track by Ken Asama. Of a definitely more acrid character than "Ceramic Love" , the track is centered around a distorted beat with various synthesizers pulsating and fluttering in and out, around and abound the track like mercury butterflies. A heavily processed voice intones "Earth", "Earth", "Earth"...

Some interesting parts all-right (although some are of a more questionable character; ie. the fake DJ-scratching) but ultimately "Earth" comes across as more of a filler track, existing in the shadow of it's flipside brother, rather than anything thats capable of standing on it's own two (metaphorical) legs.

Ceramic Love was later re-recorded by Urban Dance for their self-titled album released in 1985. Personally I think SHINOBU's version is far superior to the Urban Dance version, but feel free to judge for yourselves.

Download.
Divshare / Mediafire
On an unrelated note I would like to warn you, dear readers, that posts during December will be a bit sporadic. In addition to being swamped with work (I'm currently on a seven day workweek with generous and plentiful helpings of overtime), all the social activities that the season demands makes it hard to find the (surprisingly large) amount of time posting on HABIT OF SEX takes.
Posted by nattliga_toner at 9:40 AM

I'm definitely going to download this. I've been listening to some 4-D lately, so this came at the perfect time.

I found Shinobu versions better, but the recording is kinda bad

Wow i was familiar with the urban dance record but was unaware it was a cover - great! - please more analog synth music! thanks again for your work
rus

Very nice, the A-side is now easily one of my favourite Techno-Pop tracks of all time.