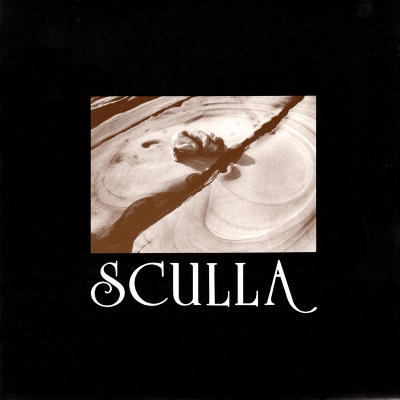 Side B
In Your Current
Phantom of Coast

The concluding part to our series of releases pertaining to the "Process of Evolution" compilations is this EP by goth band SCULLA. This was released in 1989 on the Conneca Label - the female-owned label which put out stuff like the BARDO THÖDOL 12" and the ANTENA flexi posted earlier.

This was the only ever solo release by SCULLA. Otherwise they appeared on a couple of compilations; namely the "Process of Evolution vol. 2" LP, the "Only You Collection" cassette (also on Conneca) and finally on the "Kiss xxxx" CD (a sort of soundtrack CD made for Maki Kusumotos manga of the same name. Maki Kusumoto also drew the cover illustrations for ZI:KILLs "Close Dance" album and GILLES DE RAIS first full-lenght "殺意"). SCULLA also released an incredibly rare split cassette demo with BARDO THÖDOL.

While some of their work (such as "Librate" from "Process of Evolution vol. 2" and their song on "Only You Collection") are centered around a rapid, pulsating sequence of either guitar or synthesizer; the tracks on this EP are of a more menacing and sluggish nature. "Ashamed" on the A-side starts out with a sombre guitar riff and slowly builds on with a rhythm section teeming with lumbering loom, with some piano thrown in for extra dramatic measure. "Ashamed" is crowned by it's lyrics, sung completely in english in vocalist Tanakas trademark ultra-angsty way.

The short, spacy and ominous instrumental interlude "In Your Current" follows on the B-side, and then lets way for the second proper track on this release - "Phantom of Coast". Being sort of reminiscent to "Ashamed" in it's instrumentation and construction; "Phantom of Coast" is somehow both more aggressive and more subtle than it's flipside companion. While none of the songs really do have a clear-cut chorus (another SCULLA trademark), the obtuseness of "Phantom of Coast" may put it in the backseat upon initial contact; but repeated listenings have, at least for me, made it clear that it may be one of SCULLA's finest moments. 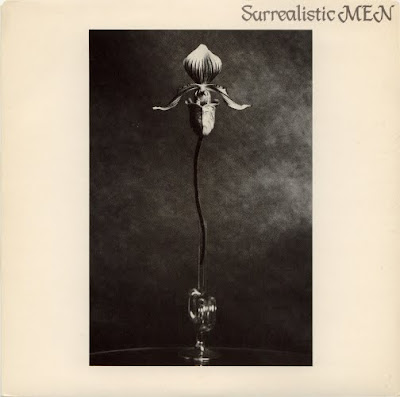 Side B
Documentary Fiction
Dark

This is the first of two entries aimed to showcase the talents of some of the few bands featured on the "Process of Evolution" series of compilations that actually released anything apart from their contribution on said compilations.

"'Kakuseiki'" is the first EP of SURREALISTIC MEN and was the third released of the Vital Plant Ltd. imprint - a short-lived subsidiary of Explosion Records which focused on the Japanese goth scene of the time. The rest of their meagre (quantity wise) but interesting output included the GARA 8" and ZOA:s debut 12". Apart from releasing this EP and appearing on the first "Process of Evolution" album, SURREALISTIC MEN also put out a self-titled flexi and also had a track on the "Only You Collection" cassette on Conneca Records, alongside greats such as LIBIDO, BARDO THÖDOL and ARLEQUIN (as well as the BARDO THÖDOL side-project CASE OF CYTHEREA).

Focusing on this EP, "Kakuseiki" stars off with the awesome title track, with it's sharp, rotorblade guitar riff and pulsating rhythm section makes for a really impressive goth/post-punk anthem. No idea why the track title is in quotation marks, but that's the way it appears on the sleeve.

The next two tracks are of a somewhat lighter character; much sparser in texture and employing a far more airy and spacy guitar sound. Both tracks are quite good, but "Dark" in particular stands out due to it's clever usage of an instrumental chorus. In addition, the use of delay pedals on these tracks seem to foreshadow the early visual kei movement which was to rear it's head a couple of years down the line. In fact, the guitarist of EX-ANS, Yukino, was actually a bass player for SURREALISTIC MEN for a short while.

In summary; this is a great EP that I think should be of interest to fans of Japanse goth and post-punk as well as folks into the early visual kei scene. Please enjoy and stay tuned for the second installment of complementary posts to the "Process of Evolution" series.