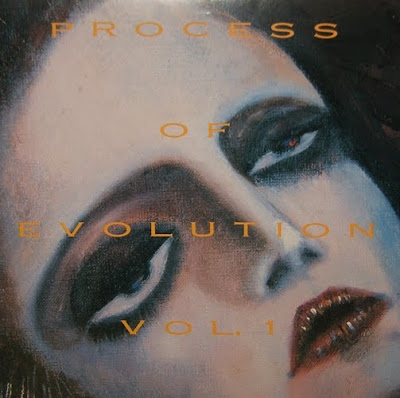 This is the first volume in the "Process of Evolution" series of compilations showcasing underground Japanese post-punk and new wave bands. This was curated by a certain Mal (Maru Yukinori) - a seasoned veteran of the Japanese indies scene of the 80:s. Not only did he play with movers and shakers like LIBIDO, YBO² and AUTO-MOD, but he also led his own group (BLACK TANZ) and did stuff like draw all those neat pictures for the "Nevatsuku Mask" booklet. 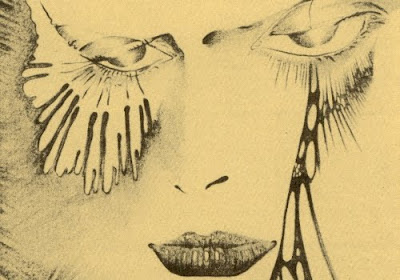 In addition to all this, it turns out Mal was also pretty skilled at putting together compilations. While the second volume in the series is more obscure (both in regards to availiability and choice of bands), "Process of Evolution vol. 1" serves as an excellent primer to the Japanese indies scene at the time.

One gripe regarding this release is that several of the tracks featured here are more or less identical to versions found on the artists own releases. For instance, the GENKAKU MIME track is exactly the same as on their "Butterfly" 12" on Trans Records, with the exception that the vocals are for some reason mixed a bit lower.

GEIL's contribution, however, is unique to this release. Unfortunately, it's not one of their better efforts IMO (especially in comparison with their excellent "Velnadet" 12"). Vocalst Alice quirky and usually quite interesting way of singing just comes off as annoying here. But the Confuse style wall-of-FUZZZZZZ at the end is a nice touch though.

The next track I've already talked about elsewhere, so I won't go on about it here. Suffice to say that CLOCK WORK's "Can't But Go Away" is a brilliant, brilliant slice of throbbing, synth-fueled new wave. Be sure to also catch their track from the "All the Children are Insain" comp. if you haven't already.

Finishing off the A-side is some dystopic acid dementia courtesy of L-TRANS. Quite different from what we heard on "Tokyo Dead Line", the cut here is of a much harsher and claustrophobic character; sounding like SADIE SADS on quaaludes or a schizophrenic take on ZOA at their more out moments. This track is actually called "Failgestalt" (it also made an appearance on L-TRANS mini-album "Hard Rocks" on LLE), but since no title is listed anywhere on either the record, sleeve och insert I've decided to have it tagged as unnamed for this particular release.

MANNEQUIN NEUROSE is one of those bands I've been meaning to check out for ages but never really got around to doing. Basically, all I know about them is that they've got a killer track opening the flipside of this record. Again, no title is listed anywhere so I'm not sure if this track actually has a name or not. Anybody know if it turns up on any of their singles/EP:s? I'm really fond of this track and particularly enjoy the echoed guitar and distorted vocals meshing together to create a bleak and hazy, yet somehow strangely optimistic, mood.

Snapping you out of that cloudy atmosphere is "Nobody Listening" by RADIO INSANE - a total shredfest marrying the austereness of their second single with the frantic pace of their debut. Exact and ecstatic - this shit just kills! And the great thing is that it is followed by an even better track; namely SURREALISTIC MEN's phenomenally spastic "Modern Packs". They had a song with the same name on their self-released flexi, but I'm not sure if it's the same version or not.

The following act, TAKEI, not only settles for being the most the most obscure group featured here, but also contributes the weirdest song of the lot. "Yu Ma Ni Te!" is comprised of ridiculous synthesized instrumentation with even more ridiculous vocals on top (a.k.a. "sexy voice" according to the booklet). No other recording of this mystery duo was ever released as far as I know, and for some reason I get the feeling that they might've very well been a studio band put together especially for this compilation. But I'm only speculating - feel free to correct me on that point.

Saving the best for last, "Process of Evolution vol. 1" concludes with an untitled song by BLACK TANZ. And what a song! An absolutely insane mix of stuttering rhythms, enigmatic vocal samples, free-form piano plinkage and, of course, more than liberal doses of saxophone skronk makes for a totally singular listening experience. None of their other material sound anything like this. In fact, I can't really think of ANYTHING that sounds much like this. For all the great tracks featured on this record - this is without a doubt my favorite.

I regard "Process of Evolution vol. 1" as one of the premier compilations to come out of 80:s Japan - and fortunately, it's one that can still be found pretty easily and at a reasonable price to boot. As for the second volume, it's at least twice as rare and about half as good. Nevertheless, it has it's moments and will be forthcoming here on HoS. Some final trivia: even though no label is listed this was most probably put out by POE Records, which seems to have been a sort of vanity label for Maru Yukinori, subsidized by Explosion Records (who put out stuff like the GARA 8", the first ZOA record, as well as a lot of heavy metal stuff).