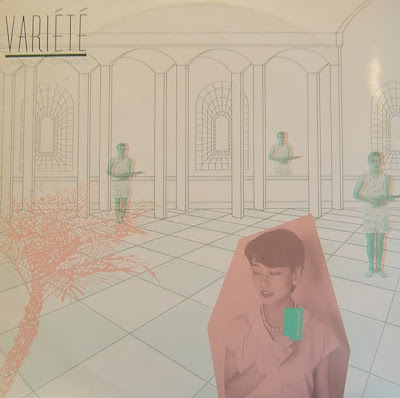 Side A
These Melodramatic Things

Side B
Fairly Terry
Whatever The Last Man In The World You Are
Released: 1983
Label: Kitchen Records
Catalogue number: DANCE 2
Format: 12"

As requested ages ago, here we finally have Variété's second effort "Location at Hollywood". Following their debut, this 12" EP was their last recording featuring original members Ruichi Hiko and Tokyo Andjou, backed up by a ridiculously long list of guest performers (I wouldn't be too surprised if any of the members in the reformed Variété is featured under alias here). This record also marked the end of the bands generally synth-based sound.

Opening track "These Melodramatic Things" is almost identical composition-wise as on it's appearance on the previously posted "In Style" LP; though this arrangement is of a much more electronic vein. The drum machine is more prominently featured here, and the weird semi-synthetic choirs are a nice touch - nevertheless, I do think I prefer the slicker pop version a smidgeon over this.

The next track, "Fairly Terry", is unique to this release and has a sound that harkens back to the "Souvenir" 8" - although in a more energetic and (sadly) vocoder-less way. A nice enough pop song once again based mainly around the drum machine. Do watch out for the incredibly annoying hillbilly hoe-down section near the end though.

Lastly, we have the oddly titled "Whatever The Last Man In The World You Are". An instrumental track (save for some short snippets of french dialogue), this may very well be my favorite track of the bunch. Lush swathes of pads and strings coupled with bleeps, bloops and some faint wisps of percussion floating in and out through the hazy dazed atmosphere.

Download.
Divshare / Mediafire
Posted by nattliga_toner at 5:21 AM 8 comments: