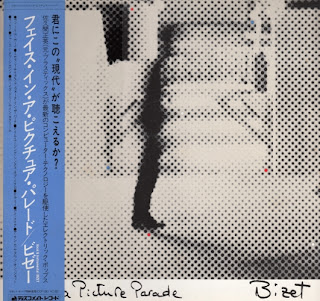 Side A
Feel a Boy
Mrs. Y Takes A Walk In The Park
I'm Using Things Of Micro
Tell Me
I Make...

Side B
A Man Come Down On Jet
La! La!
First Of The End
Boy's Dream In Scream

Holy shit - an update!
With the frequency of new posts here being little to none, I figure I'd better pull out some serious shit as I finally get around to actually updating.
I was saving this record up to be posted as a christmas treat, but have decided to post it up several months in advance to celebrate this phenomenal blogging comeback. BIZET is yet another one of those bands who seem to have released only one record and then promptly disappear into the mist of history.
BIZET's sound lays perched somewhere between new wave and synth, with some of their tracks being guitar-centric and others revolves around a more electronic core. In that sense BIZET kind of reminds me of EXCENTRIQUE NOIZ even though their sound isn't really that very similar. For some reason I'm also getting some light TAKUMI vibes, although the common denominator is maybe rather the pretty surrealistic lyrics utilized by both (please find a scan of the lyric sheet included for your pleasure).
Now, I was quite hesitant in acquiring this not only because I'd then recently been burned on a couple of promising looking but unfortunately shitty private presses , but the inclusion of a Rolling Stones cover didn't bode well. I decided to pull the trigger anyway, although I was sceptical to the very end - I even remember whispering to myself "please don't be crap, please don't be crap" as I waited for the needle to work it's way past into the first grooves. Not only was "Face In A Picture Parade" not crap, but as it turned out  absolutely awesome!
Packing a punch right from the start is funnily/creepily titled "Feel A Boy", a new wave/synth hybrid masterpiece powered by a simple but haunting synth line and driving bass, with sparks & flares of psychedelic guitar. "Feel A Boy" sets both the bar and mood for this record, with regards to both the
instrumentation and aura of airy, dreamy melancholia.
Other highlight include the fevered and surreal "Mrs. Y Takes A Walk In The Park", the fast paced synth-telephone madness of "I'm Using Things of Micro", the soaring yet ominous "A Man Come Down On Jet" and so on. In fact, I think this whole album is more or less brilliant from start to finish. I mentioned earlier that I was concerned about the inclusion of a Stones cover ("Tell Me"), but BIZET comes through and deftly dresses the song in an updated and quite compelling arrangement.
The only thing even closely resembling a letdown is "La! La!" which just sounds a too dense and turgid to these ears. I do have to admit that the effects on the vocals sound pretty damn cool. It's also the only song on this record that doesn't end in a fade out which sort of gives the impression of waking up from a dream, seeing as the other tracks could potentially go on for all eternity. Hmm, I realize I might be overanalyzing this  just a wee bit ...but still!
BIZET closes the album with the sturm und drang super-downer "Boy's Dream In Scream". Positively reeking of despair and dread, this track (seemingly about an Young Werther style suicide) is a seriously sombre affair with it's razorblade guitars and chilling synthesizers hissing like leaking canisters of liquid nitrogen in the background. Guess BIZET wanted to have their album end like a farewell to a dear friend - forever!