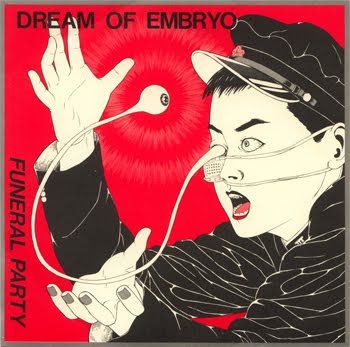 Side A
Double Platonic Suicide

Side B
Dream Of Embryo

In this season of snow, sub-zero temperatures and what feels like round-the-clock darkness - what could be better than putting on some up-beat, poppy summertime music and chase that winter blues away? I'll tell you what - by indulging oneself in the audio-cryogenics of Funeral Party and their darkwave masterpiece "Dream Of Embryo".

Released on cult label Pafe Record in 1986, Funeral Party was a one-man or possibly a two-man band (information is as usual very scarce) who had a short but very intriguing career. Apart from this single they also put out two tracks on the great "Vision Of The Emotion" compilation, also on Pafe.

Since that is all I know about the bands, let's turn our focus to the music. After a barely audible introduction, "Double Platonic Suicide" erupts with a blizzard of chilly synthesizers whilst ominous melodies slither around the rigid drum-and-bell beat and creaky, creepy vocals slowly sips forth from the icy sound-tapestry. Befitted with an impossibly dark ambience, this is surely the thing Hans Beckert would walk around humming were he a minimal synth-buff rather than a Peer Gynt-freak.

The B-side, "Dream of Embryo", manages to be an even more disquieting cut, if perhaps in a more subtle way. Backed up by a drum beat so spaceous and sparse that it barely holds together, wobbly and melancholic synthesizers produce a profoundly claustrophobic mood and the vocals seep through like vapors coming off of something buried beneath the floorboards. Watch out for the looped, distorted scream that suddenly rips apart the somber atmosphere - truly a spine-chilling moment that always makes little hairs on my neck stand on end.

And then of course we have the amazing cover art. Drawn by none other than the (in)famous Suehiro Maruo, the cover perfectly illustrates the feeling of this record - grotesque, weird and angst-filled yet so very beautiful. By the way, if you haven't checked out the utterly awesome gallery of Suehiro Maruo record-covers over at Kurutta make sure to do it now!

Unfortunately, the are some crackles and pops present on my copy of "Dream of Embryo" - possibly because of the pressing since my copy looks perfectly clean. I've tried to manually edit out some of the more annoying pops, but beware that there will be some slight noises present. I hope you'll enjoy anyway - this is one of my absolute favorite Japanese singles!

Update: After taking a look at the insert that came with the "Vision of the Emotion" LP, I see that Funeral Party are listed with complete credits. Duh! Anyway, they were a two-man band consisting of T. Kusano on vocals, drums, synthesizer, guitar and bass and M. Morita on synthesizer, vocals and electronics.
Posted by nattliga_toner at 11:37 AM 16 comments: