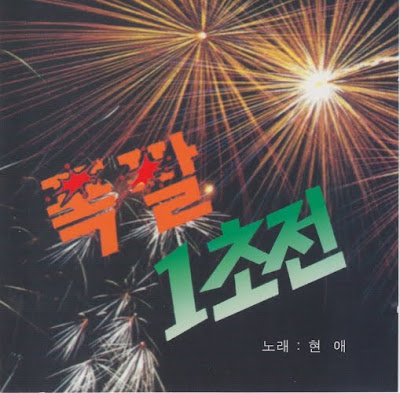 Even though the main focus of this blog lies on obscure Japanese underground vinyl releases of the 80:s, we will make an exception for this exceptional CD. Probably released sometime during the mid-90:s and then later slightly repackaged and distributed for a Japanese market of music fiends and freaks – I myself and my friend and colleague Loser Knife (the man behind the wonderful A Softly Sleeping Rose blog) are cautiously proud to bring to you, dear readers, the Korean monstrosity that is HYONE (written either in katakana as ヒョソエ or in hangul as 현아. Forthis review, we’ve chosen the katakana way of writing the name as to avoid confusing this chugging chaos with a certain popular K-pop star).
Loser Knife = bold text
nattliga_toner = italics
폭발1초전 is, for lack of a better word, quite a trip. It's complete disregard for all things conventional is something that is at once arresting and off putting. The grand scale of the album is one of the major factors that make this album a daunting piece of music; the tempo for almost every single song is exactly the same. I find myself constantly checking my music player to make sure I haven't lost track of which song I've just finished and which song I have just begun. What's worse is that it often is nearly impossible to tell when a song has ended; there is no chorus/verse/chorus theme going on here, and the beginnings and endings are almost meaningless, as if HYONE/ ヒョソエ was completely unaware of those sorts of norms when he/she was recording it. In fact, it's almost comical to me to include any separation of tracks; to me it seems like HYONE/ ヒョソエ simply clipped the song up later on, and then randomly assigned titles.
It's like strange little jingles floating into each other - sometimes (but not always) separated by strange synthethic percussion and HYONE's excited yelps and grunts. The sheer massiveness and relentlessness of the whole thing is quite mind-boggling.
So, the album is certainly not something to just sit down with and go "okay, I'm in the mood for this song right now . . . "; the whole thing should be heard as a whole. While I have indeed sat down with this document on the deeper crevices of madness and rainbow colored depravity quite a few times, I would perhaps warn any new listeners against that, if only to protect their sanity.

This thing is like an inverted take on the 2001 monolith - a gargantuan slab of brainscrambling madness which grants whoever that comes into contact with it the gift of STUPID! To top it off; seeing as most of the songs blend into each other so seamlessly, I get the impression that at least large chunks of this were recorded in one take. Which is surely as bizarre a feat as they come.

This album absolutely gives the crazed warbling of the likes of 人生 or Picky Picnic a run for their money. Actually . . . I'm inclined to say that this album tops any albums by those bands simply because I don't believe the lunatic that recorded this album INTENDED to make it insane. I'm sure he/she wanted it to be at least a little weird but there does still seem to be some sort of debased sincerity present here.

I'm not even sure he wanted it to be weird at all. If I were to use any word or phrase to describe HYONE's music, apart from "insane" and "endurance test", I would say "heartfelt". To my ears, the music presented is 100% blood and tears genuine heartfelt emotion - albeit presented in a truly odd way. I used to frequent this thai restaurant which apart from such charms as cheap beer, excellent food and (at times) wonderfully atonal karaoke, were also haunted by this utterly bizarre huge (both in regards to height and width) dude who prior to intaking a meal would pour huge quantities of soy sauce over the free shrimp chips served out of a wicker basket as a starter. With the soy spilling out of the basket onto the table and floor he'd relish these outlandish snacks while waiting for his main course. I'm not really sure what I'm getting at with this little story, but the weirdness experienced is about on par with the aural outlandishness provided by HYONE.
HYONE/ヒョソエ almost sounds like he/she's performing over a karaoke machine, due to the unchanging beat of the drum machine, and the very slight changes in the keyboard rhythms. The echo of his/her voice certainly guarantees that he/she was working with very low quality equipment here. I imagine this was recorded in a basement somewhere in South Korea, with very minimal and very cheep recording instruments (perhaps a solitary tape recorder, positioned close by his keyboard and mic). I see him/her dancing and working up a sweat, wearing baggy shorts and a brightly colored undershirt while he/she puts all of his/her soul into what would become this album.

The weirdness isn't even constrained to the music either, but also bleeds out into the packaging as well. The phenomenally unexceptional cover art aside, we're also faced with such quaint irregularities such as double catalogue numbers and a non-existant 22:nd track listed on the back. This also came with an obi in Japanese rather than Korean - I'm pretty sure this is because a Japanese label (a rumour suggests P-Vine) imported original copies of the Korean CD and repackaged them (ie. added an obi) for a domestic audience.

In my opinion the two final tracks are the ones worthy of special notice. Clearly recorded separately from the rest of the album, it is here that the otherwordly strangeness of HYONE truly reveals itself. Even though they follow the same basic formula as the rest of the CD, HYONE's excited vibrato turns into a weird distorted warble, pushing this even further out into the Twilight Zone. Truly alien music.I've been told that the music of HYONE belongs to a Korean genre called pon-chack. An inherently quite peculiar genre, pon-chack supposedly got it's start when cheap keyboards went publicly availiable in Korea sometime during the early nineties. In a sense I guess it's akin to the impact the WASP synthesizer had on UK post-punk, synth and power electronics in the eighties, except we're talking about dinky casio setups here rather than relatively sophisticated synthesizers. From what samples of it I've heard, pon-chack (sometimes called techno-trot, if I'm not mistaken) is a pretty freaky genre all of it's own, but I still think that HYONE ekes out a truly singular detour all of his/her's own.
To summarize, I find myself enthralled, disturbed, awed, and most of all confused by this album. To quote the great film critic Roger Ebert (in his review of Dusan Makavejev opus, Sweet Movie . . . actually, if I was to make a comparison between this album and a film I would most certainly choose Sweet Movie to compare it to; both are sickly saccharine and yet so grossly bizarre that they defy proper understandings of art): "And if you find this review unsatisfactory, so do I: the [album] defies criticism even while it seems to demand it, and I keep on thinking about it even while I know I'm not getting anywhere."
Download.