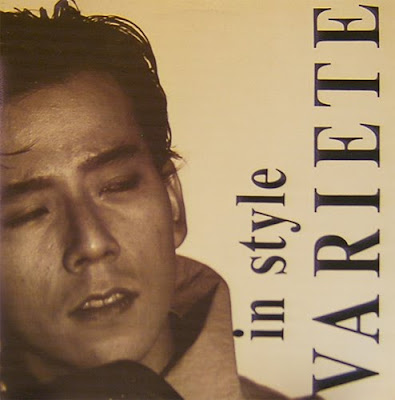 Lenght: 38:17
Bitrate: 320 kbps
"In Style" was Variete's third release, and their first LP. It was preceded by the doinky and vocoder-saturated "Souvenir" EP and its 12" sister release "Location at Hollywood". I procured this mainly on a completist impulse since I had their other two records, but as it turned out, "In Style" came to be the big pop epiphany for me in 2010.

I certainly had my doubts regarding the record - not only due to the incredibly fruity cover art - the fact that NONE (!) of the members from the original line-up remained also sent out a fair share of warning signals. Nevertheless, upon needledropping I couldn't help but to go from sceptical to happily surprised to absolutely blissed out. Totally charmed!

"In Style" is filled to the brim with unbridled euphoria, extasy and energy - skillfully executed and served up with a wondrous blue-eyedness. Even though both composition and performance are excellent through and through, the main focus of course winds up on the androgynous vocals of singer Masumi Arichika. High pitched and with a tendency to severe quaver, they seem to shudder with a sheer joy of performance. Kind of similar to UK group The Associates in a sense ...well, y'know, if The Associates had been high on life and vitamin C instead of copious amounts of cocaine whilst recording.

Back to "In Style". Opening track "Divine" is just what it claims to be. A glorious outburst of rapturous abandon, the song veritably explodes out of the speakers with a flurry of acoustic guitar and fluttering piano flourishes. Thick little bursts of semi-atonal guitar noise provide some necessary spice to the borderline overpowering sweetness of the concoction, and there's some pretty damn great bass playing going on to boot!

"Misses no Fushigi" is a more subdued and straightahead affair, especially considering what preceeded it. Definitely an album track; I tend to view it as a transitional tune - a chance to cool off between more potent stuff. I'd hesitate to call it filler though - the autumnal atmosphere it evokes is a pretty and dreaming one, in particular when the woodwind sets in during the refrain.

Those of you following the Habit of Sex tumblr may have already made the acquaintance with "Sugar Yellow" - without a doubt my favorite track on this whole LP. A perfectly realized pop song to myears, lovingly performed with a childlike sense of wonder. Gets me all fuzzy and warm inside (pretty damn mushy too). "Pure softness and fruity, overripe bliss" as I put it elsewhere.

"Hakucho" betrays the europhiliac roots of the band. All vocals, save for an accompanying piano and some violin, we find ourselves transported to a ball at the Versailles. Or possibly to a student reception in Germany. Weimar Republic era, of course. The A-side finishes off with the hilariously ludicrous romp that is "Tarzan and Jane in Paris". Mmm, Paris! (No Homer)

The B-side opens up with "These Melodramatic Things", which first appeared on the "Location at Hollywood" 12". Composition-wise, it's more or less identical to it's previous incarnation but I do think the mix and arrangement is superior on "In Style". Driven by drum machine, laden with french dialogue and glazed with violin, it's a pretty lighthearted tune ...with a sudden burst of the melodrama mentioned in the title a bit more than halfway through.

"I Could Have Dance [sic] All Night" follows and is, as you've probably guessed, a sort of adaption of the (almost) similarly titled (and somewhat more famous) tune from "My Fair Lady". I hesitated to call "Misses no Fushigi" a filler, but this one I'm not so sure about. Ah, I'll let it slide ...if so only because of the gloriously overblown performance. The slight slack is promtply picked up by "Francis Grey" - probably my second favorite track after "Sugar Yellow". Dramatic strings and subdued, almost wimpering vocals color "Francis Grey" a shade darker than it's fellow tracks. At least until reaching the bridge when it explodes into a by now well-known exuberance.

A breeze of nostalic-sounding melancholia comes next, in the form of "One Clear Day". Like on "Hakucho" (although quite different in execution) the arrangement is scaled down to vocals, piano and violin. Sentimental without getting cheesy, it paves the way for the grand finale - "Balconey Serenade". Originally appearing as the closing track on "Souvenir", the version present here is a hyper-charged one and proves to be a suitably rapturous ending of the album.

"In Style" was followed up by a single ("La Dolce Vita") and another LP ("Golden Life") before Variete called it quits. Although I feel that "In Style" is indeed the zenith of the bands output (with their debut coming in a close second), I can wholeheartedly recommend all of the bands output. Casual browsers beware though - the band entered a special kind of realm of cheesiness during the "Golden Life" period reserved for a certain kind of audience whose taste balances between transcendent and non-existing (see image below).

(from the cover art of "Golden Life")