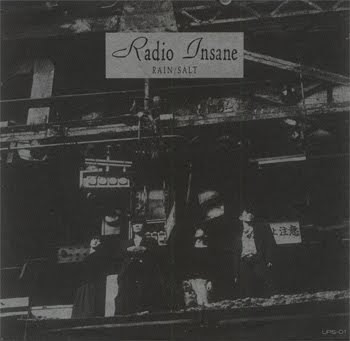 Tracklisting
Side A
Rain

This is the second single by fairly obscure and sadly unsung band Radio Insane. They also released a 7" flexi (the bewildering but disappointing "Complete" flexi) and appeared on a couple of compilations during their existence; their killer cut on "Process of Evolution vol. 1" being particulary noteworthy. That being all I know about the band, let's skip right ahead to the music. Any additional information would of course be very welcome.

Not sure if there's too much to say about the music either - two solid tracks that speak for themselves just fine. Although dark and brooding in nature; a certain hard-to-put-your-finger-on kind of ambiguity permeats the proceedings, particulary on the almost bouyant B-side.

But first up is the pummeling steamroller of a track that is "Rain". Consisting more or less by an austere riff repeated again and again (minimal goth?); the grim grind churned out by the band provides a ten foot concrete foundation for vocalist Koji Nakayama to lay out his lamentations. Otherwise, drummer Mai Kazukis steady yet slightly off-kilter performance stands out. Watch out for the little bass-breaks that shatters the compact dusk for just a moment. Heavy stuff.

As spartan as "Rain" is, as dionysian is the flipside "Salt". Whereas the previous track stood rooted firmly in position, "Salt" is all over the place - the giddying bass and drums providing a dizzying momentum while the guitar scratches along post-punk style. That sense of ambiguity mentioned earlier is perhaps most prominent here - a creeping sense of dread undermines the otherwise relatively up-beat and whimsical nature of the song; in no small part due to the vocals being delivered with excellent ambivalence of emotion.

My copy of this record is a bit beat up so there's some annoying crackling to be heard despite my attempt to clean it. I hope you'll enjoy anyway!

Posted by nattliga_toner at 4:50 AM 8 comments: 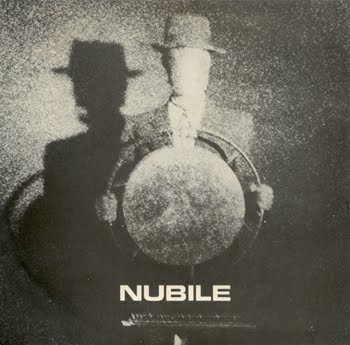 Side A
Spyral Totem Toler Than East Poll

A while ago, in the wake of the Sadie Sads post, someone requested more weird Wechselbalg-records. Well, I'm certainly not one to deny such a request ...and what record to fit to the bill than Nubile's outstandlingly outlandish second single. Just look at those song titles - you know this is going to be good!

The band was formed by bassist/singer Ken Tanami - famous (relatively speaking) for playing in legendary punk band Typhus together with the equally legendary Tam (founder of ADK Records and, for a while, member of The Stalin) and for designing the bisarre and grotesque cover art to Kikeijis first release.

The rest of the bands setting was mostly in constant flux; the only other permanent member being guitarist Yoshihide Igarashi who, as you might recall, also played with Sadie Sads. Other members included keyboardist Takashi Sekine, known from Excentrique Noiz who shared a place together with L'arc~en~Ciel and Rosen Kreuz (among others) on the famous "Gimmick" compilation.

What was also in continous mutation, most likely due to the shifting membership, was the kind of music that Nubile created. Their first release (a self-titled flexi on ADK) was eastern-tinged sludge-y punk while most of their later output were a decidedly idiosyncratic take on mutant disco (also mutant funk, for that matter). I personally am quite fond of just about everything put out by the band; but I'd say that the most fascinating stop on their bumpy and winding career nevertheless is the gothic abnormality that is "Spyral Totem Toler Than East Poll".

Although echoing slight influence from The Birthday Party at their more outre, the pure weirdness of the title track is hard to match. Some of you've might have encountered it on the "Revenge of Wechselbalg" compilation (actual copies are scarce, but a glitchy rip has been floating around on the net for a while) alongside the other "Wechselbalg weird three"-cuts (the previously posted "Angora" and "Breaking Glass" by Sodom being the other two).

Further adding to the unnerving ambience of the song is the bizarre vocal stylings of Tanami and Igarashi. Never have the lyrics "honey, honey precious" sounded more sinister. What really gets me, though, is that off-tempo percussive bashing that appears for a short while during the intro. A confusing, if not downright demented, musical move to begin with; the fact that it sounds overdubbed makes it all the more perverse.

The B-side "Tranceyse Diskow Veryall" betrays more of an influence to The Birthday Party and cuts down a bit (but only the slightest bit) on the derangement of its flipside twin in favor of rocking out ...mental illness-style! Although still firmly with the rhythm section in focus; the guitar moves a little more to the forefront, even providing the song with a main riff in the form of a stunted arpeggio. The ominous feel of "Spyral Totem..." is also quite present here, with several abrupt starts and stops making for a suitably uneasy development of the song. Now this is my kind of disko(w)!

Believe it or not, this single was actually reviewed in the classic American punk-zine "Maximum Rock 'n Roll" back in the day. Here's what reviewer Tim Yohannan had to say:

"Don't ask me what language the titles are supposed to be in, but
this band mails from Japan. The A-side is a quirky, slightly
ambient number that sounds like Jello somehow got his ass down
to Asia. The B-side sounds like BIRTHDAY PARTY got their butts there."

Although more condensed than my own review (I'm a longwinded fucker); some sentiments are indeed shared. Can't say I'm really getting much "Japa Biafra"-vibes though.

In short; a greatly disturbing and disturbingly great single. Do enjoy!

PS. As a final fanboy-ish hail of praise: isn't Nubile just about the coolest thing you could ever come up with calling a band? Just consider the juxtaposition of the music produced and the actual meaning of the word. Hell yeah! More gothic stuff coming up to darken your summer.

Posted by nattliga_toner at 1:41 PM 8 comments: