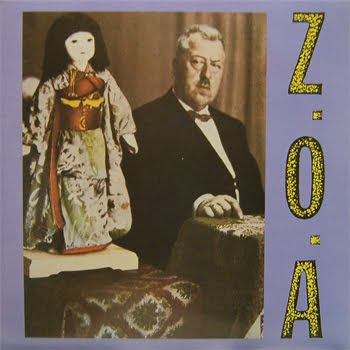 ZOA Side
Out
Shout To Shout

ZOA was one of the more prolific bands of the Japanese underground, releasing a slew of records and still being active well into the noughties. Fronted by singer and only permanent member Seiichiro Morikawa, the band at times counted (relative) celebrities such as Ruins-drummer Yoshida Tatsuya and rital ambient unit Vasilisk in their ranks.

This is their self-titled debut, released on the Vital Plant Ltd. imprint - a subdivision of metal label Explosion Records, meant to put out records of a more gothic type (other bands on the rooster included Gara and Surrealistic Men). ZOA:s later efforts are leaning more towards the progressive and hard sides of rock. In comparison, this 12" is of a much more dark and experimental nature which could be accounted for by being the only one employing this particular setting - by the next release (1987:s "Off Black" on Trans Records) all members save Seiichiro Morikawa were replaced.

Kicking off the record is the mesmerizing "Out". Revolving around a repetitive, semi-oriental guitar-figure backed by the rumbling rhythm-secion, ZOA effectively utilizes the guitar as a snake charmers pipe. This minor-key dirge evokes an almost psychedelic (off-psychedelic?) state of simultaneous bliss and unrest. The processed vocals hovers above, spreading wobbly despair over the entire proceedings.

Following "Out" is "Shout To Shout", a.k.a. "Cry The War". A virtual stampede of tom-tom heavy drumming, super-heavy slap-bass and guitar slashing wildly slashing about - this is certainly one of ZOA:s most memorable moments, not at least due to the bizarrely evocative refrain of "CRYYYYYYYYYYY THE WAR!" smashing through the aural space as a brick to the face. This was later re-recorded for the first "NG" compilation on Trans Records, although I'd say that the version present here is the better one.

Another hard and fast tracks awaits us on the backside of the platter in the form of "99 (Dead Body)". The rhythm-section here is truly phenomenal. In particular the drums with their almost abstract smatters of leaden tom-toms impress - hats off indeed to drummer Masami Hoshino. Otherwise, most of what I said about "Shout To Shout" applies here - "99" is as fierce a ripper as they come; truly a great cut. Watch out for the weird up-beat passage that suddenly comes and goes somewhere past the middle of the song.

Possibly saving the best for last, ZOA rounds off the record on a note of total despair with the super-downer "Das Grab" - the definitive soundtrack to your nightmare of choice. Sounding as if expelling demons en masse, the absurdly processed vocals of Seiichiro Morikawa span the range of negative human emotions (rage/fear/depression/apathy) whilst engulfed in the toxic vapors emitted by the acid rain poured from the guitar. Ever wondered what human limbs encased in cement might sound like when hitting the ocean floor? The bass and drums provide an ample answer. Somewhere in the background a drum-machine brittly ticks away. For all your cathartic needs, "Das Grab" delivers in spades.

I've yet to hear all of ZOA:s output, but I'm inclined to consider this their crowning achievement. Not to say that their later works are bad in any way - far from it! - but they are also quite different animals compared to this ominous slice of vinyl. Very recommended!

Unfortunately, I've had to implement word verification for comments in an attempt to decrease the ever increasing amount of spam we've been getting lately (as have most other blogs). My sincere apologies for this inconvenience - all comments are read and appreciated, so I hope I'll keep on hearing from you all!
Posted by nattliga_toner at 7:14 AM 2 comments: 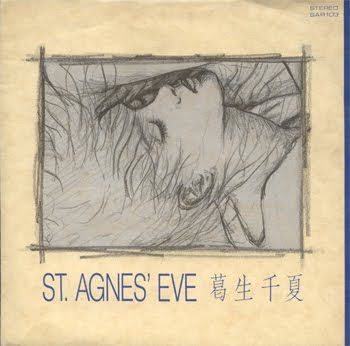 Side A
The Eve Of St. Agnes
Elaine The Fair

Side B
Isabella
Annabel Lee
Crossing The Bar

As a diversion from all the dark, twisted stuff recently (ha!) posted, I'd like to offer you, my dear readers, something a bit more serene this time around. Also, I would like to try and atone for the lack of female-fronted acts posted here on Habit Of Sex thusfar. So I give you Chinatsu Kuzuu's magnificent EP "St. Agne's Eve"!

As with the Shinobu 8" flexi posted earlier, this is also something that I've only just recently managed to lay my grubby little hands on and which I cannot resist an uncontrollabel urge to share with all of you. Unlike the case of the Shinobu flexi, my first hearing of "St. Agnes' Eve" turned out to be dissapointing - not really due to the music, but rather since it turned out to be something quite different from what I'd imagined it to be.

A little bit more than a year ago I saw this floating around eBay under the guise of being a rare minimal synth record. Just the thought of what kinds of obscure, analogue bleeps and bloops that could be contained within such a package as "St. Agnes' Eve" (I mean, just look at the cover!) really got my salivary glands going. But the gods could naturally not let this kind of silly coveting go unpunished, so the auction was lost to a collector with a larger wallet than me. So imagine my delight when I managed to score a copy of my very own the other week for a measly 300 yen. And imagine my surprise when I put this record on and what my ears were greeted by. Although minimal in execution and employing synthesizers; the music on "St. Agnes' Eve" is far removed from what one thinks of when hearing the term minimal synth.

Well then, just what is on this disc exactly? All right, get ready for this - musical adaptions of poems by 19th century luminaries Keats, Tennyson and Poe. Whats that? Sounds dull? Well yeah, it should ...but it doesn't! Aside from Chinatsu Kuzuus most impressive, Nico-esque vocal performance (with an almost flawless English accent!) the tunes are steeped in a deeply evocative, ethereal atmosphere.

Reviewing individual tracks is a bit pointless since they are more or less identical in structure, feel and quality - this is a record that should be taken in as a whole. Nevertheless, were I to choose a stand-out track I'd go with opening track "The Eve Of St. Agnes" - a momentous organ-led adaptation of the first stanza from John Keats famous poem; loaded with mysticism and blissful melancholy. Elsewhere, we are treated to the hypnotic raindrop-soundscapes of "Elaine The Fair" and the strangely upbeat gothic love song "Annabel Lee". Good stuff!

Apart from this record, Chinatsu Kuzuu previously release another 7" on the Sarusuberi label ("The Lady of Shallot") in 1985. She later went on to a long and varied career as a composer and singer. Strangely enough, she seems to have been involved in Chu Ishikawas soundtrack to Tetsuo in one way or another.

Until next time; here's hoping you'll all find this disc as enjoyable as I do. For those who don't - rest assured that we'll soon be right back on track with some choice demented, acid post-punk insanity.