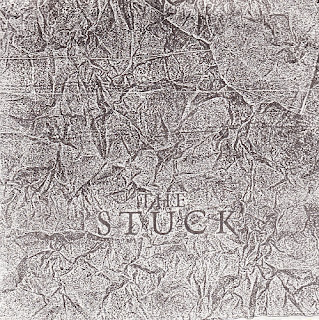 Side A
Not Dark
Glassy

The first and only release of THE STUCK, an 8" single-sided red flexi disc released by the band themselves. It seems like THE STUCK were active only for a short while during the late 80:s and then faded into obscurity - the fate of many a band and the source of excitement of many an obsessive collectors (under which banner I suppose I fit).

THE STUCK indulges us with two quite excellent tracks, the first one being the actually quite dark "Not Dark". Tinged by a general sinister aura and a kind of slightly draggish quality, "Not Dark" somewhat reminds me of "In Sight" from NUBILE's debut flexi - ever though THE STUCK delivers in a much slicker fashion. Really a great track ...but the best is still to come!

The definitive pinnacle of THE STUCK's admittedly limited output is without a doubt "Glassy" - a brilliant, shadowy slice of driven post-punk both embracing the austere post-punk ambience and at the same time foreshadowing the emerge of the more decadent visual kei movement of the early nineties. I supposer the nasal (almost whiny) vocals may be an acquired taste, but to my ears they add an absolutely essential charm to this genious song.

Apart from this flexi, THE STUCK also released an alternative recording of "Glassy" on the "Neo?" compilation on the Portrait label, as well as appearing with a live rendition of the same track on the obscure VHS omnibus "psycho vision".

Lastly; a few words about the packaging of this record. First off, even though it's kind of nondescript, I'm really fon dof the front sleeve. Looking assembled on an ancient graphic layout program; the obtuse pattern of leaves (or maybe crumpled paper?) with the band logo makes for an air of both tech-savviness and DIY roughness. Other parts of the sleeves design depicts some sort of weird, exotic ritual which gets at least me thinking of the mud people from the sleeve of THE POP GROUP's amazing "Y" album ....a slight nod to the british post-punk pioneers by THE STUCK maybe?

Anyway - this may not be the most original course as far as Japanese 80:s underground music in concerned; but it is certainly a stury meal and in my opinion quite a succulent one as well. This is definitely a great favorite of mine and I do hope all of you out there will enjoy it as well!

Posted by nattliga_toner at 3:23 PM

Awesome - glad you liked it!

"GLASSY" is very (positive adjective here); vocals seemed a little bit fun for me, but, well i should say its have own fascination.

I’m flattened for your blogs writings and blogs as well.
visit sex drugs

Post-punk never dies! Great stuff! Can you fix the Link?

I think its the most joyful habit from all the habits But for this habit, you must have strong sexual enhancement and larger penis size that will provide by cobra 150 tablets price in pakistan

Do you understand there's a 12 word sentence you can communicate to your crush... that will trigger deep emotions of love and impulsive appeal for you buried within his chest?

That's because hidden in these 12 words is a "secret signal" that triggers a man's impulse to love, idolize and guard you with his entire heart...

This impulse is so built-in to a man's mind that it will drive him to try harder than ever before to do his best at looking after your relationship.

In fact, triggering this all-powerful impulse is absolutely mandatory to getting the best possible relationship with your man that as soon as you send your man one of these "Secret Signals"...

...You'll immediately notice him expose his mind and soul to you in a way he haven't experienced before and he'll perceive you as the one and only woman in the universe who has ever truly tempted him.

https://pastnews.org
Past News: Latest News Updates All Over The World

Nice post, you give the clear idea of the topic and I subscribed your blog

Nice post, you give the clear idea of the topic and I subscribed your blog