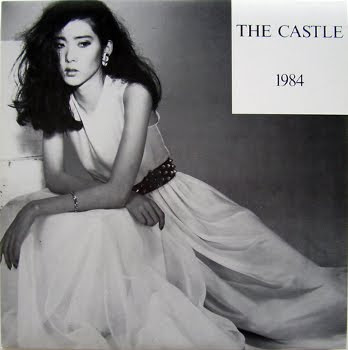 Side A
Rebirth
Mars

Side B
Fire
Dark

Side C
Dizziness
The Invitation of the Dead

All right - here it is. The holy grail of Japanese minimal-synth. Forget your Portray Heads and Popsong's Factory or what have you (actually, don't do that; those are great too!) - this is the real deal.

This 2x12" set was released a year after Tomo Akikawabaya debuted with the "Mars" 12". He went on to release two more 12" singles and a 7" before disappearing into thin air. All of the 12" releases were later collected and released as a VERY limited box set (30 copies!). Any collectors reading this that happens to own that box set ...do you really need it? Of course not! Send me a mail and I'll gladly take that bulky ol' thing off your hands. Your shelves will thank me!

Anyway, back to Akikawabaya. There's not much I can tell you; the man himself is a total mystery. No pictures of him or interviews with him seem to publicly exist; no record of any live performance is to be found. All information available has been gleaned from the sleeves of his records. All of them are self-released, all of them recorded at the same studio (Bea Pot Studio) using the same engineer ...and almost all (save for one) feature the same pretty model on the cover. Rena Anju is her name and she seems to be the key to the Akikawabaya universe. Either as a muse and/or love interest - anyhow, Akikawabaya seems utterly obsessed with this woman (he even sewed the dress that she's wearing on the cover of "The Castle"!), and considering her prominence in the visual presentation of his work it's not too hard to imagine much of the music is about her or dedicated to her.

I and C. Patera from Stalking Duppi decided to do a collaborative review on this record; mainly since we both love it to death and want to babble on and on about it. I'm sure most of you will want to too.

So without further ado, here's our thoughts about this marvelous record. I'd be very keen to know what you readers think about "The Castle", so feel free to drop off a comment or two!

N: Kinda ballsy to start off a double album with an introduction covering most
of side one! Still, it's a beautiful introduction - lulling one into the
mysterious world of Akikawabaya.

C: Yeah, it definitely sets the stage. It's almost 'Berlin School' considering the length and overall pathos. This may not make sense to anyone else, but I mentally file Rebirth under "songs that make me think of magic castles falling apart at the end of fantasy movies".

N: What is there to say? If music were drugs, "Mars" would be heroin.
In my book one of the best synth ever put to wax - absolutely
essential listening! You bet I sing this in the shower.

C: Totally sublime. That 'ch-ch-ch, ch-ch-ch' rhythm is one of my favorites, and coupled with a great chord progression, a ridiculously simple instrumental break, and a terrifically lurid guitar solo, it's simply unbeatable. Let's not forget Tomo's voice either; the guy sounds like he's mustering up as much soul as he can. I can't imagine how you sing it in the shower - these lyrics are impenetrable! The only thing I can kinda make out is I am lost in your memories, never to wake to daylight. Cheer up, Tomo!

C: Hey, here's a song about coming home from work.... ok, now we're talking about Infinity and the Universe... You've never seen such a blue really gets me in this song, though I have no real clear idea of what he's referring to. I thought for a while that this song is about coming home from a long day and making love to your lady, but that super creepy chorus that shows up really doesn't set that mood, does it?

C: You had mentioned to be before that you really enjoyed the key change between Fire and Dark. When I first heard it, I didn't realize I was listening to a new song, it's so seamless. I wonder if the lyrics are as much of a continuation. What I can catch: Somehow you tried to run through [...] Just continue never minding. You can not find your way out anymore. And before you know, time has gone. And now even the world is lost. The darkness covers all your view. The wind blows like a [...]
Major lyrical themes on this album seem to be loss, being lost, memory... and possibly a sort of unrequitedness that only feeds my Rena Anju theories, haha!

C: The same beat continues through this side (with some minor changes). A good track, but not one of my favorites, and the lyrics here are even more impenetrable to me.

N: I'd have to agree - despite having a great refrain, "Dizziness" is the only time I feel "The Castle" losing momentum. It originally appeared on the flip-side of the Mars 12", and I must say that it works much better as a B-side than as an album track - here it just resides as (dare I say it?) filler. It's not a bad track, though - not by a long shot! Perhaps I'm just getting picky with all these other wonderful tunes?

THE INVITATION OF THE DEAD

C: Kinda spooky, eh? Thunderstorms, a wobbly, theremin-esque lead. And hand-claps! Made by real hands, I think. Someone is thanked for their hand-claps in the liner notes. Why couldn't Tomo clap himself? I mean, he's listed as playing all sorts of other things (including "Heart" and "Clayey Guitar", whatever that means).

N: Let's not forget he plays the "Gizmo" too! The thing that really makes this track for me is the free-form violin that sometimes bubble forth. Unsettling to the max! The dude doing the hand-clapping is engineer Takaaki Hanya (even more unsettling is that fact that I've somehow memorized this) - seemingly the only other person to ever contribute to Tomo's music.

N: A few shades more joyful than the previous track, "Chair" formly oozes
bittersweet romance. Though I can't make out all of the lyrics - "I live alone" is quite enough to send plenty of shivers up my spine. Keep your ears peeled for the subtle but GREAT basswork here.

C: "I live alone" indeed. Tomo's entire oeuvre oozes loneliness, not too mention 'loner'-ness in record collecting terms. Which is part of why I'm so fascinated. Sure, minimal synth in general was made in the bedrooms and basements of alienated loners, but it's the infusion of New Romantic elements that make even more bittersweet. I typically think of the New Romantic genre as being suited to and made for a large audience (and later actually associated with wealth and success, i.e. Heaven 17, etc), but there's something a bit sad, even deluded, about completely obscure romanticists like Tomo Akikawabaya, Shinobu, etc.

N: As it turns out - the journey through the Castle ends in the dungeon - or rather the void. The hopeful slimmer of light peeking through during "Chair" has now been fully engulfed in darkness. Who knew that a falling sinus tone could sound so very unsettling! Nevertheless, a beautifully composed and executed track - although perhaps not single material such as "Mars" or "Diamond", "Sleeping Sickness" is most definitely one of Tomo's most brilliant efforts.

C: Definitely my favorite song after Mars. Very cold and ponderous atmosphere. Each element is working perfectly - love the tone of the synthesizer here, and of course that delicate guitar bit.