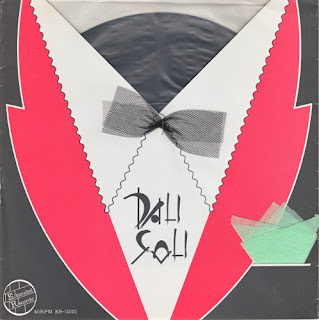 Even with such monsters as DIASTEREOMER, EARTHLING and YUUKYOU NO TOU having been unearthed, the Japanese minimal synth scene of the 80:s still proves to be as fertile a soil for great unknowns as ever. Randomly springing forth out of nowhere is this enchanting and absolutely brilliant 8" flexi by a group called DALI SOLI.

As I wrote ages ago in the SHINOBU post. I usually wait a while (more like aeons) before putting up newly acquired stuff, as to have a chance to get more acquainted with them and hopefully be able to do some research too. But as with the "Ceramic Love" flexi, this thing came in the mail just the other day and I can't resist sharing this little gem ASAP.

The strangely titled "Tinkle Clink Vox For You!?" is centered around the song on the A-side ("SoLyDa"), with various sections from it being broken down and slightly altered to form the two tracks of the B-side. Starting off really minimalistic with a lenghty section of sombre synth pads coupled with fey vocals and an odd drum machine rhythm, "SoLyDa" goes through a transformation via a somewhat unsettling middle part and emerges on the other side as warmly throbbing synth goodness. This flexi sort of reminds me of the PALE COCOON 7" - not that they're especially alike in sound, but rather that they share the same dreamlike atmosphere.

And as if the music wasn't enough, the (mildly put) elaborate packaging of this record really pushes this into full-on brainmelt territories. I mean, just how many record sleeves come with little mesh bowties? 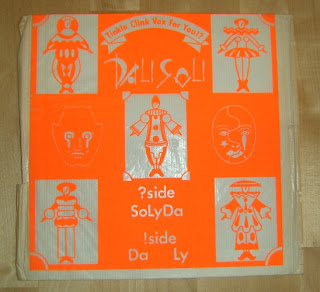 Starting off the excessive design is the printed (silkscreened?) outer bag. 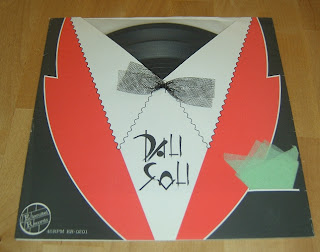 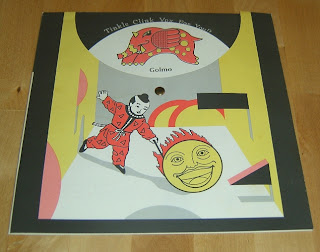 On the flipside, we find our pals "Golmo"... 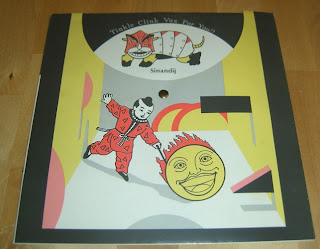 ...and "Sinandij" on this little spinning wheel thingamajig. 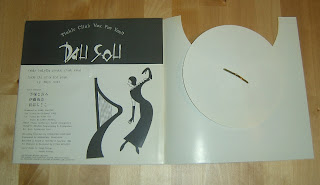 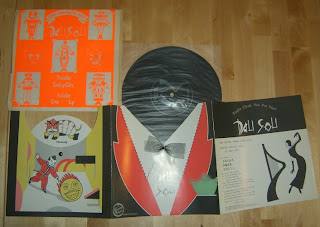 ...and the whole shebang. I wonder how many of these were
made, seeing as they must've been a pain in the ass to assemble.

There's some background noise on this that I just couldn't get rid off, but I hope you'll all find it enjoyable anyhow.

Posted by nattliga_toner at 9:23 AM

That packaging is so cool. The music itself too!

The packaging is next level for sure, and the music too! Really thrilled about this record, so glad I took a chance on it.

Thanks! This seems so interesting!

That jacket design is just too much for my eyes! Amazing!

Thanks for your comment! I hope you'll enjoy DALI SOLI - they floored me for sure. The packaging is beyond words for sure, I've never seen anything like it.

nice posting.. thanks for sharing.

Hello beautiful women. Am Mike 25yrs looking for a casual sexual relationship with a mature lady from the ages of 28 to 40. Holla for fun memorable moments
0900 phone sex